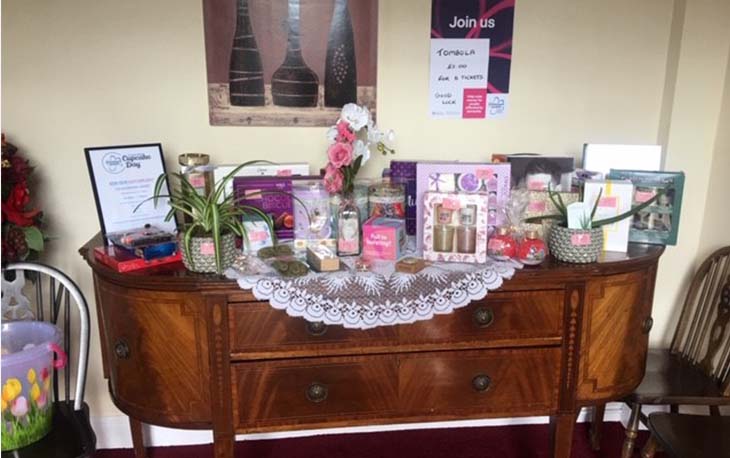 Our Lupton Avenue branch hosted a cupcake day on 5th June to coincide with their monthly Dementia Café.

The event was attended by two ladies from Dementia Research alongside eight residents and two carers from Wykebeck Complex Care Centre.

As well as the delicious array of homemade cakes on offer, those in attendance were treated to live music for a good old-fashioned sing-a-long.  Colleagues from across the area came out to support their Dodgson’s cohorts including Sam Redman from Huddersfield Funeral Home leading the singing and not forgetting Denise Helm from GH Dovener West Park and Jackie Higgins from Dodgson’s in Kippax who made the cakes.

A raffle and tombola raised a fantastic £185.86 for the Alzheimer’s Society and all prizes were generously donated by members of staff. The tombola proved to be quite popular with passers-by calling in to see if they could win big!

A table decoration demonstration was expertly provided by Michelle from Lawnswood Florals.

Diary Manager Charlotte Ambler said: “ Our Dementia Café is going from strength to strength and we are building a bigger following each month. We had great feedback about the cupcake day, everyone really enjoyed it and all said they would be back for the dementia café next month. This was a real area team effort we would like to thank everyone who made this event so special

All funds were donated to the Alzheimer’s Society in memory of my mum. I have set myself a target of £10,000 to raise in her memory.”

Have you found what you are looking for today?

Teeing off for Children in Need